On February 27th, we were joined by the stellar C.S.E. Cooney, Nina MacLaughlin, and Sonya Taaffe. Check out The Forum Network’s recording below:

C.S.E. Cooney is the author of the World Fantasy Award-winning Bone Swans: Stories. She is also an audiobook narrator and the singer/songwriter Brimstone Rhine. Her work includes Tor.com novella Desdemona and the Deep, three albums: Alecto! Alecto!, The Headless Bride, and Corbeau Blanc, Corbeau Noir, and a poetry collection: How to Flirt in Faerieland and Other Wild Rhymes, which features her Rhysling Award-winning “The Sea King’s Second Bride.” Her short fiction can be found in Ellen Datlow’s Mad Hatters and March Hares: All-New Stories from the World of Lewis Carroll’s Alice in Wonderland, the Sword and Sonnet anthology, Rich Horton’s Year’s Best Science Fiction and Fantasy, Jonathan Strahan’s The Best Science Fiction and Fantasy of the Year, and elsewhere.

Nina MacLaughlin is the author of Wake, Siren: Ovid Resung, a re-telling of Ovid’s Metamorphoses told from the perspective of the female figures transformed, published by FSG/FSG Originals in November, 2019. Her first book was the acclaimed memoir Hammer Head: The Making of a Carpenter. Formerly an editor at the Boston Phoenix, she worked for nine years as a carpenter, and is now a books columnist for the Boston Globe. Her work has appeared on or in The Paris Review Daily, The Believer, American Short Fiction, the Los Angeles Review of Books, the Wall Street Journal, Meatpaper, and elsewhere. She carves spoons and lives in Cambridge, Massachusetts.

Sonya Taaffe reads dead languages and tells living stories. Her short fiction and poetry have been collected most recently in the Lambda-nominated Forget the Sleepless Shores (Lethe Press) and previously in Singing Innocence and Experience, Postcards from the Province of Hyphens, A Mayse-Bikhl, and Ghost Signs. She lives with her husband and two cats in Somerville, Massachusetts, where she writes about film for Patreon and remains proud of naming a Kuiper belt object.

Errick Nunnally, Bracken Macleod, and Isabel Yap joined us at Trident on October 24th! Check out The Forum Network’s recording below:

Errick Nunnally was born and raised in Boston, Massachusetts, and served one tour in the Marine Corps before deciding art school was a safer pursuit. He enjoys art, comics, and genre novels. A designer by day, he earned a black belt in Krav Maga and Muay Thai kickboxing by night. His work has appeared in several anthologies and is best described as “dark pulp.” His work can be found in LAMPLIGHT, TRANSCENDENT, WICKED WITCHES, THE FINAL SUMMONS, PROTECTORS 2, the Podcast, NIGHTLIGHT, and the upcoming ChiZine novel, LIGHTNING WEARS A RED CAPE.

Bracken MacLeod is the Bram Stoker and Shirley Jackson Award nominated author of the novels Mountain Home, Come to Dust, Stranded, and Closing Costs, coming from Houghton Mifflin Harcourt. He’s also published two collections of short fiction, 13 Views of the Suicide Woods and White Knight and Other Pawns. Before devoting himself to full time writing, he worked as a civil and criminal litigator, a university philosophy instructor, and a martial arts teacher. He lives outside of Boston with his wife and son, where he is at work on his next novel.

Isabel Yap writes fiction and poetry, works in the tech industry, and drinks tea. Born and raised in Manila, she has also lived in California and London. She is currently completing her MBA at Harvard Business School. In 2013 she attended the Clarion Writers Workshop, and since 2016 she has served as the Clarion foundation secretary. Her work has appeared in venues including Tor.com, Strange Horizons, and Year’s Best Weird Fiction. She is @visyap on Twitter.

On August 1, we were at Trident again with the amazing K. Chess and Max Gladstone, and The Forum Network was there to record!

K Chess is the author of FAMOUS MEN WHO NEVER LIVED (Tin House Books, 2019). Her writing has appeared in The Chicago Tribune’s Printer’s Row Journal, PANK, Salon, Tor.com and other outlets. Her short stories have been honored by the Nelson Algren Literary Award and the Pushcart Prize. K earned a BA from Vassar College and an MFA from Southern Illinois University. She was awarded a W.K. Rose Fellowship in the Creative Arts. She reads fiction for Quarterly West and teaches writing at GrubStreet in Boston and Rhode Island.

Max Gladstone has been thrown from a horse in Mongolia and nominated twice for the John W Campbell Best New Writer Award. Tor Books published FOUR ROADS CROSS, the fifth novel in Max’s Craft Sequence (preceded by THREE PARTS DEAD, TWO SERPENTS RISE, FULL FATHOM FIVE, and LAST FIRST SNOW) in July 2016. Max’s game CHOICE OF THE DEATHLESS was nominated for a XYZZY Award, and FULL FATHOM FIVE was nominated for the Lambda Award. His short fiction has appeared on Tor.com and in Uncanny Magazine.  His most recent project is the globetrotting urban fantasy serial BOOKBURNERS, available in ebook and audio from Serial Box, and in print from Saga Press.

Julian K. Jarboe lives in Salem, Massachusetts. They are an Associate Editor at PodCastle magazine, a graduate of the Odyssey Fantasy Writing Workshop, and most recently a fellow at the Writers’ Room of Boston, where they also sit on the board. Their writing can be found in The Atlantic, Strange Horizons, The Fairy Tale Review, and anthologized in the LAMBDA award-winning Year’s Best Transgender Speculative Fiction series, among others. They also produce and co-host Mothers & Others, “the podcast about maternal figures and mommy issues.” 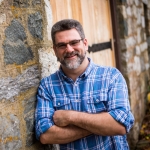 Christopher Golden is the New York Times #1 bestselling, Bram Stoker Award-winning author of Ararat, Snowblind, Dead Ringers, Of Saints and Shadows, and many other novels. With Mike Mignola, he is the co-creator of two fan favorite comic book series, Baltimore and Joe Golem: Occult Detective. As an editor, his anthologies include Hark! The Herald Angels Scream, Seize the Night, and The New Dead, among others. He has also written screenplays, video games, radio plays, an online animated series, and much more. He lives in Massachusetts.

Theodora Goss was born in Hungary and spent her childhood in various European countries before her family moved to the United States. Although she grew up on the classics of English literature, her writing has been influenced by an Eastern European literary tradition in which the boundaries between realism and the fantastic are often ambiguous. Her publications include the collections In the Forest of Forgetting and Songs for Ophelia; The Thorn and the Blossom, a novella in a two-sided accordion format; debut novel The Strange Case of the Alchemist’s Daughter, and its sequel, European Travel for the Monstrous Gentlewoman. She has been a finalist for the Nebula, Crawford, Locus, Seiun, and Mythopoeic Awards, and on the Tiptree Award Honor List. She has won the World Fantasy and Locus awards.

Lyra Selene was born under a full moon and has never quite managed to wipe the moonlight out of her eyes. When she isn’t dreaming up fantastical cities and brooding landscapes, Lyra enjoys hiking, rainstorms, autumn, and pretending she’s any good at painting. She lives in New England with her husband, in an antique farmhouse that’s probably not haunted. Amber & Dusk is her debut novel.

N.S. Dolkart is the author of the Godserfs trilogy of theological epic fantasy novels, beginning with 2016’s Silent Hall and concluding with this past October’s A Breach In The Heavens. In non-writing life, he has taught dementia care and Israeli folk dancing (but not at the same time), sung as Darth Vader in an opera, and sired two children who will one day enslave all the nations of the earth as foretold by prophecy. His website is nsdolkart.wordpress.com, and you can follow him on Twitter @N_S_Dolkart.

Elaine Isaak is the author of The Singer’s Crown and its sequels. As E. C. Ambrose, she wrote The Dark Apostle historical fantasy series about medieval surgery, which concluded in 2018 with book 5, Elisha Daemon, and as E. Chris Ambrose, the Bone Guard international thrillers. Elaine has written how-to articles for the Writer Magazine, and non-fiction at Clarkesworld, and taught at the Odyssey Speculative Fiction Workshop. An art school drop-out, Elaine continues to create wearable art and sculpture. Elaine also works as part-time adventure guide. Under any name, you still do NOT want to be her hero.